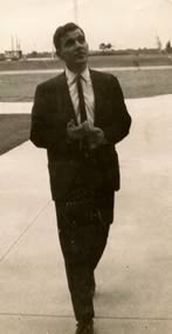 I was born in 1946 to parents whose differences could not be more dramatic.  One had a family history of verbal, physical and sexual abuse, promiscuity, incest, murder and deceit; the other compensated for two generations of alcoholism by clinging to our illustrious ancestors - Brazil’s first industrialist and Uruguay’s first Catholic Bishop - proud of “giving the Church a priest in every generation.”   Naturally, I abhorred the former and identified with the latter, so as a youth I tried to become a priest.  Failing to “make the cut,” I refused to even consider marriage until I was 30, becoming instead a dedicated advocate for the poor.

I was a precocious radical activist under the tutelage of my parish priest, who taught me Karl Marx.  I joined other idealistic youths who dreamt of overthrowing the “old order” to bring about a more just one, until the growing political tension led my parents to send me out of the country until things “cooled down.”  So in 1964 I immigrated suddenly to the US, leaving behind a fully developed project of building 99 homes in a rural slum on the outskirts of my city.

Drafted soon after immigrating to the US, I joined the U.S. Air Force, serving a four-year tour of duty in Texas and England, while hardening my opposition to the Vietnam War and my sympathy for the radical student movement of 1968. Upon separation from the service in Europe, I studied for two semesters at the Sorbonne and became immersed in a counterculture that mixed art with drugs, compassion with human rights, religion with the occult, illicit sex with political protest. 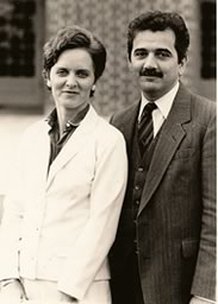 I returned to the U.S. in 1970 and began organizing Hispanics in urban and rural settings in New Jersey.  There Diana and I joined forces as fellow rebels from 1971 until 1979, combining idealism, libertinism, radical politics and pseudo-spirituality.  We worked together (breaking up and leaving each other often) on causes ranging from helping the poor, community development, Hispanic civil rights, and unionism, to feminism, community theatre, arts advocacy,  political lobbying and human rights.  We lived in Mexico, in California, in Texas and in New Jersey, moving often, living in several communes, experimenting with various drugs, lifestyles and “spiritual” paths.   We were miserable, fighting constantly, and were it not for a providential encounter with a “Charismatic” priest we would not have stayed together, let alone marry.  He dealt with my deception which provoked our legal marriage, but we were still rebels.

In 1975 Diana’s parents were wonderfully saved, and they immediately began to testify their newfound faith to us.  Their love and forgiveness were especially impacting, since until then they had seen me as the corrupting influence in their young daughter’s life.  On March 8, 1979, at a Women’s Aglow dinner in New Jersey to which they had invited us, we both surrendered to Christ.  We pursued intense discipleship for six months until we were called to Virginia Beach, on Oct 1, 1979.

From the time we came to Christ at the ages of 33 and 25 respectively, our lives and assumptions had to be utterly dismantled and rebuilt almost from zero: earning a living, being married, bringing up children, learning to obey God.  Having been radical rebels, the Lord made us radical disciples.  He gave me a job as a prison guard, four children and a godly wife to root me in His Word.  Our church trained me as a deacon and then as an elder in 1985.

In 1983 the Lord called me to study at Regent supported by our church, to prepare for a future vision involving the University. In 1986, the year after I graduated, He led me to found Semilla as a ministry to teach Latin American Christian leaders the principles of God.  I have made over 120 international trips, teaching and mentoring hundreds of key and emerging Christian leaders in 20 countries and organizing a dozen international leadership gatherings.  After growing up in the Charismatic movement, in 1995 God gave us a home at James River Community Church, where I serve as an elder.  He has used me here and in Latin America to teach on marriage, love, authority, a Biblical worldview, Godly relationships and leadership, and lately, with Diana, on a radical Christian marriage.